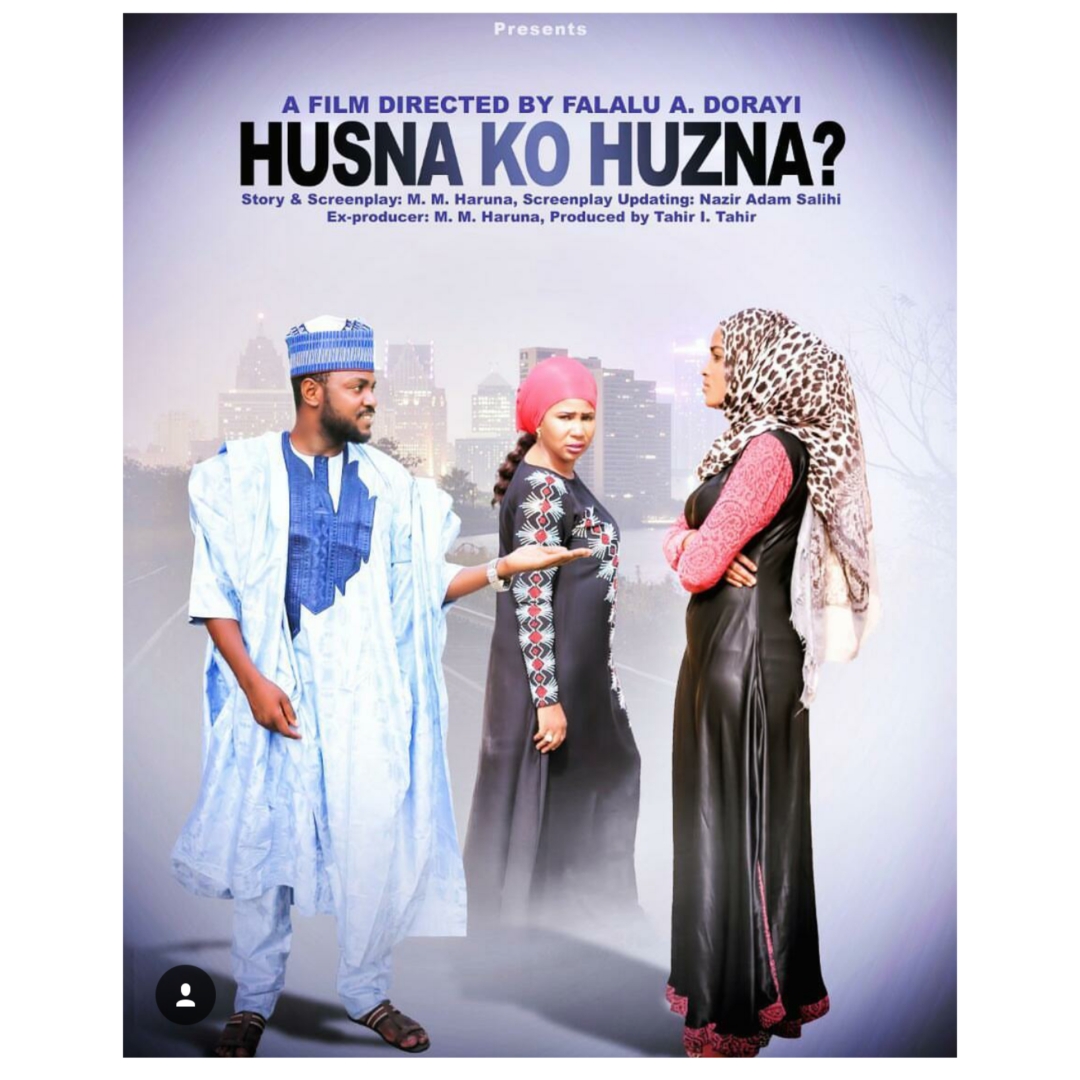 Introduction
The film, Husna ko Huzna, comes with quite a number of novelties. Notably, it was not hurriedly produced as were many films in Kannywood film industry. I can remember being told of its pre-production and production phases almost a year ago. The post production, too, took unconventional period before it’s finished. This is replete in the handling of the special effects (SFx) used in the film. The advertorial is yet another well-planned thing, for every now and then, listeners of different radio stations in Kano, and probably beyond, were informed about the film. The voiceover adds a freebie to the prospective viewers that the film was carefully subtitled in Standard English unlike other films. Many viewers would not expect anything short of this as the executive producer cum screenwriter, M.M. Haruna, is a well-known English teacher in Kano.

Plot Summary
(Warning: this section contains spoilers)
The semi-horror, fantasy is an old wine in a new bottle; it repackages a usual love-triangle story. Husna (Jamila Nagudu) and Abdul (Adam A. Zango) are set to wed, while a certain kolanut and groundnut hawking lady, Huzna (Fati Washa), tries everything possible to stop that from happening as she deeply loves Abdul. She does everything, follows him everywhere but he, time after time, rebuffs her. There was a time his friend and his other friends beat her up to deter her from bothering her heartthrob.

It eventually appears that Huzna is a genie. Her schemes nearly break the duo’s relationship midway in the film. It takes Husna’s mother, and their friends’ assistance and insistence for them to patch up. Tired of the drama, one day Husna steals a deadly chemical from their school laboratory and pours it on Huzna’s face, not knowing that she is not human. However, Huzna turns up at their house the next day to avenge the attack. After several plea, Huzna ‘murders’ her rival by possessing her soul.

After several failed attempts to woo Abdul, Huzna is goaded into violent action; she kills a guy who attempts to offer her a ride, and then Abdul’s friend who beat her earlier. Now in Husna’s form, Huzna arranges with some fellow genies to bring her to the former’s house. They cooked up a story that she is not dead when they buried her. Husna’s parents grudgingly accept their ‘reincarnated’ daughter. Soon afterwards, nonetheless, her nocturnal, bizarre behaviours give her away. They eventually discover her real identity. She kills the mother for that and nearly killed the father, too, but for the appearance of a more powerful genie.

Huzna is actually betrothed to the genie for the past 600 years; she however chooses to marry a human. He therefore takes her away. She soon returns to finish Husna’s father. An Islamic cleric exorcises the nurse she possesses to execute her mission at a hospital he’s receiving treatment. Her engaged genie reappears. He begs the cleric to stop, and that he is also a Muslim and respects the Noble Qur’an. He brings back Husna alive who was never killed in the first place and forcibly takes Huzna away.

Husna and Abdul are finally married. The newly wed couple are preparing to eat when they yet again discover Huzna’s kolanut and other assorted wares on their dining table. They are surprised and shocked to see that. The film ends with a caption thus: “the struggle begins…”

Critique
The special effect artist of the film did quite well. By and large, and in accordance with the Kannywood ‘standard’, the work deserves commendation. The transmogrification of Huzna to Husna or vice versa is so swift and superb; the acid scene, and the way Huzna stretches her hand and alters her eyeballs when attacking her prey, among other scenes, are equally well crafted. Generally, the finishing leaves little to be desired in a film industry infamous for its dearth of professionals and producing poor to average films like Kannywood.
As it is with any art work, Husna ko Huzna is not as impeccable as one might think. The biggest blooper in the film is the M.M. Haruna English Academy scene. The whole scene could, and of course should, be either completely avoided or shown differently. Now, it is unnecessarily lengthy, too detailed, and its idolization by the actors adds less than little or no substance to neither the plot development nor the centre in the real world. The thumb rule is: one must not feature in their sponsored movie, or covertly advertise their product therein.

Again, the last caption doesn’t hold up, for the struggle has begun since the very first scene of the film. The struggle rather continues. That is perhaps what the filmmakers have on mind. The reappearance of Huzna’s stuff in their peaceful, well-furnished house marks a beginning of yet another struggle, while everyone thought that it had ended with the stern warning by the cleric and her eviction from the human world by the senior, more powerful husband-to-be genie.

Verdict
On the whole, Husan ko Huzna is not a bad piece of work. For most women, I guess, the seemingly original story is en edge-of-the-seat semi-horror, for its marital tug-of-war over a charming prince motif. The actors, all of them, have done very well, with the performance of Washa lady occupying the highest position. The film crew, particularly the director, followed by the camera team, have done a praiseworthy job as well. The angles are carefully selected and taken; the light fits, and so on and so forth. I therefore rate it 3.5/5.0. It could be higher but for the insipidness of love-triangle-story in Kannywood and the overt, avoidable advertorial of the executive producer’s enterprise.

Your no. 1 dose for all things Kannywood Hausa industry. The stars and those behind the camera. Gives you movie previews, reviews, exclusive interviews and more View all posts by kannywoodscene